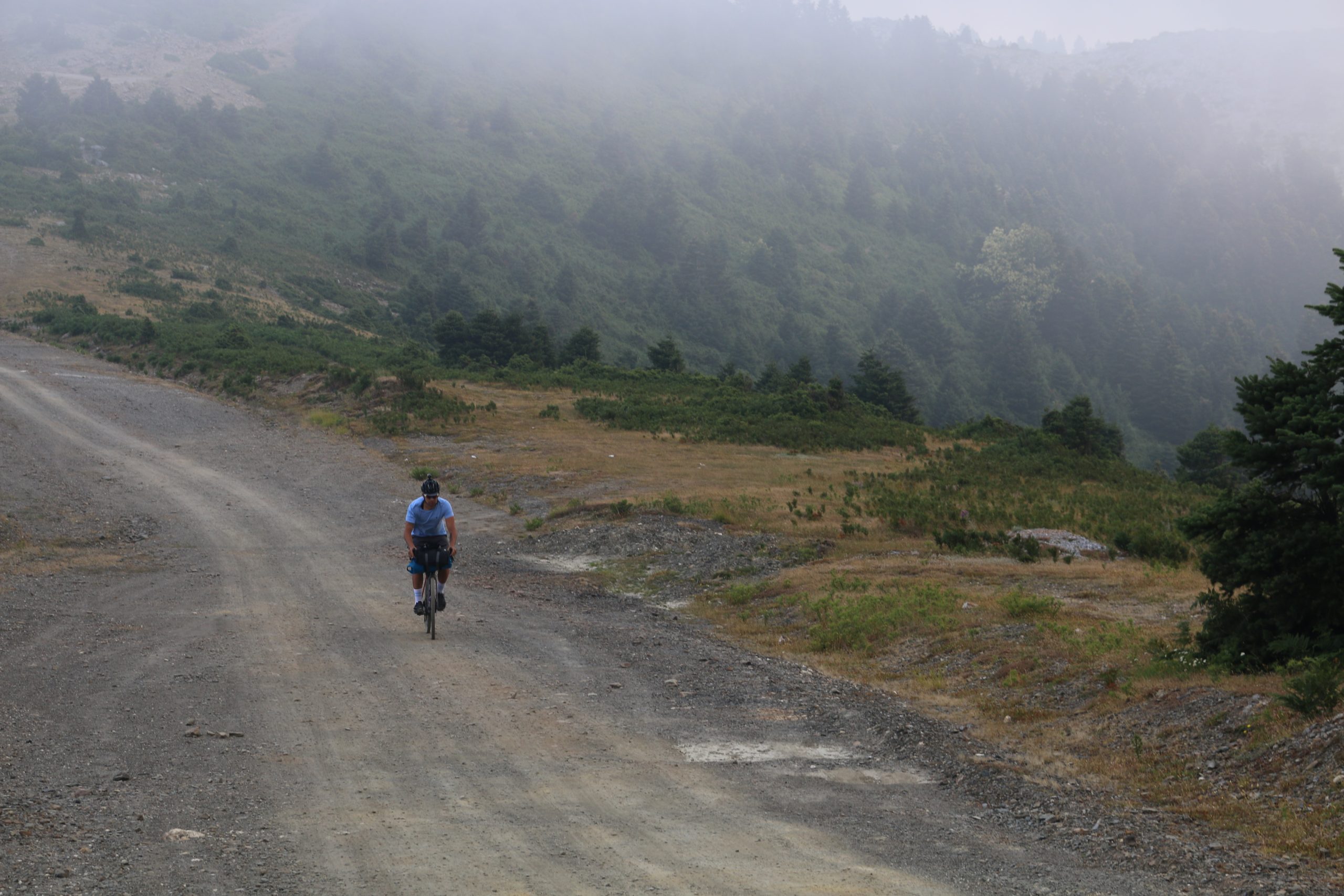 We originally set off from Athens. We had planned for 5:40 departure but due to an unscheduled Morpheus visit to my travel companion we left an hour later.

The plan was to get out of the the city via the road that passed by the old Royal Estate. We knew that the road had gentle gradient from previous rides all the way until Ippokratios Politia.

At this point we would drop to Skala Oropou to take the ferry across to Eretria.

Once we set off towards Fylla it got really hot but once we reached fylla we found a lovely little convenience store with A/C!! where we could resupply on water and grab some shade. While we waited for the sun to change position we chatted up with the owner’s. At which point we told them about our stupid adventurous idea to go and (bike)camp at mount Dirfi. They were dumbfounded promptly suggested we take the newly constructed road which saved us a climb (no objection there!) and passed by the Two Towers of Mytika

On our way there we had planned for some easy gravel roads.They were almost buttery smooth.

Once we reached Steni Dirfios, we ate then stated to head up the mountain(we set off at 19:30). The climb was BRUTAL !! We were lucky and ascended right through the golden hour.

Every so often a car would pass us by and cheer us on. It was a welcomed change to the Athenian road-rage.

We reached the Mountain shelter of MIhalis Nikolaou at 22:22.

We hastily settled in and fell asleep after a long day on the saddle.

We woke up to this… It was serene. We packed our stuff and headed down towards the village of Stropones for coffee and breakfast.The day looked great with an Vertical gain of 160 m and a distance of 23.5 km.

The descent was great and the views even better!

So make sure to follow so you don’t miss it

We quickly made our way down to the beach having passed a wooded area filled with tents and hammocks hanging amongst the trees. After we set up camp, we joyfully dived in the sea. Having done so many kilometres without a shower we were both eager to jump in.

The weather had changed it was around 06:30 and it started to drizzle but it never rained. We packed up and looked for a place to have breakfast

We started to climb back towards the village of Stropones. We were ascending our previous descent. The gradient at times exceeded 20%

As we where climbing a switchback , someone shouted “heroes”. I tried to spot who it came from but I was not able to locate them. Soon after, I saw an older Greek farmer coming towards me offering a glass of orange juice.

I declined because i had just achieved my tempo for climbing with all my luggage .

Starting to climb into the clouds

Reaching the village our luck had run out. It had started to rain

The village was the last settlement before crossing the “spine” (as the locals called it) “spine” is the highest elevation point on the road over Mt.Dirfi. We decided to stop & wait to hitch a ride with a passing pickup truck.

The lucky ride was Mr.Thanos (same name as my travel companion) he was a 60 year old gentleman working in Earth-moving machinery. He was tasked with repairing part of the road crossing the mountain.

After he dropped us off we continued our journey back to Chalkida on the way there I run into a childhood friend of mine where he was kind enough to let me load my saddle-pack and handlebar-bag into his 4×4. I continued the remaining 20km to the train station feeling light as a feather.

Thank you for reading